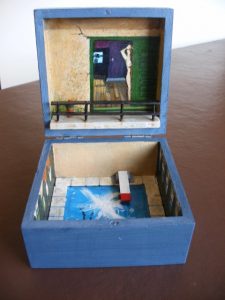 Several friends have asked me where the idea for my “inside looking out” box came from. It may be of interest to members of WNAA as it clearly illustrates how, over many years, you can store visual information, and much later, use it creatively.

Some thirty odd years ago I exhibited in a small gallery in Helmsley, Yorkshire. The lady who owned it was the right honourable Jan Needham MP. On her frequent trips down to London she would call and pick up some of my work as I lived just two minutes from Junction 21 of the M1 in Leicestershire. On one of her visits she gave me a small wooden box and asked me to decorate it. She was giving all her gallery artists the same project-to decorate the box, and the proceeds from an exhibition would be donated to charity. The show was a complete sell out.

While in The Range sometime last year, I spotted these small, cheap boxes, £2 each and bought one. It’s been lying around in my studio for months, waiting to be used.
The challenge came from the WNAA, “From the inside, looking out “ and I picked up the box with the idea of only painting on the outside of the lid. Little did I know what would lie ahead.

Jan, my wife, and I spent several lovely holidays in the then peaceful and unspoilt Yugoslavia, now Croatia, and, thumbing through my old sketch books, I came across a small drawing I had made of her looking out over the rooftops of Dubrovnik as the morning sun was coming up over the sea. It fitted the challenge ‘from the inside looking out’ perfectly.

All went well until I opened the box, which looked decidedly empty. The idea came to paint the inside of the box lid, as though looking into the room from the outside. The 3D aspect then appeared via ‘constructing’ the balcony and railings on the inside of the lid, to match with the picture on the outside. The whole thing seemed to develop as it went along, with no original planning whatsoever. 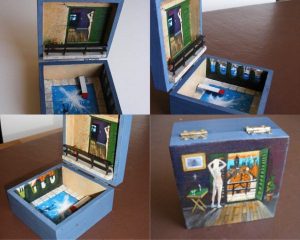 Mike Smith, Thinking outside and inside the box acrylic 4″x4”x 2″

At some stage all my pictures tell me what https://buyingativancheap.com needs doing to make them work.  I am always ‘open’ to that. It usually happens when I am struggling!!!!!! This was certainly the case with this project. A first floor apartment overlooking the obligatory hotel pool seemed the obvious thing to cover the bottom of the box. The pool and splash idea came courtesy of David Hockney’s USA pool images. The whole thing still looked unfinished, until I hit on the idea of painting the pool surround and landscape.

Have you ever tried painting inside a box measuring 4”x4”? The answer was to paint it upside down. The inside walls of the box, not me!!!!!!

In 1977 and 79 I won two prizes, 8th and 1st, in the Saunders, water colour paper manufacturers, bi annual watercolour competition. A part of the prizes was a week’s holiday on Lake Garda in Italy. I made the trip twice.
Two years on, in 1982 I completed a large painting [ 4’x3’] in pure egg tempera, of Jillian Stein sitting by the hotel pool. Jillian was another of the prize winners in the competition. The painting still sits in my studio.
The pool surroundings and immediate landscape were ideal for the inside of my box. Note the enhanced pavement perspective, which became a major part of the picture.

The box project could go on for ever. Should I now paint the outer sides of the box to match the inside? The jury is out on that one. The box tells me that could just be a bit OTT.?
My initial contact with a serving member of parliament, and the box idea.
The outside lid, which is sourced from Croatia, via my old sketch book.
The box inside images from the Hotel Bardolino in Italy, with a bit of Hockney’s USA thrown in.
All come together in a small cheap wooden box in Norfolk. How weird is that????
Look no further than the pre-Raphaelites, who used IMAGINATION and REALITY like no artists have done since, to create their wonderful and evocative images.
The fascinating thing about art is not only the picture, but often the story behind it. If we only took the time and trouble to search it out.

Look after yourselves.
Mike Smith