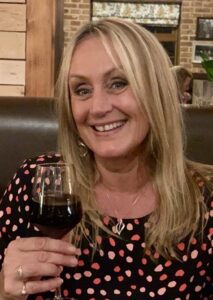 Hi, my name is Nikki Brown. I recently joined WNAA after a friend of mine who I had lost touch with, Esther Marshall, contacted me having seen a painting of mine on social media. The painting was of Hunstanton lighthouse, the result of a competition I staged on several FB pages during lockdown.

The idea came about in April, when, having been unable to work I decided to volunteer my holistic treatments to patients/staff at QE hospital Kings Lynn. Unfortunately, all the volunteers were unable to work due to Covid, so I had a Skype interview in order to secure a position for a few hours to help once normality resumed again.

Many years ago, I trained as an illustrator/graphic designer after a lifelong passion for art and this led me to set up all my art equipment again and paint with a view to selling commissions in the days that followed, especially as no one knew how long the lockdown was going to last.
As I stared blankly at all my equipment, I tried to think what to paint and having not done any painting commissions for around 18 years I was at a bit of a loss. Then an idea struck me. The volunteers’ manager, Paul, had been discussing many things about QE hospital when I applied to be a volunteer, one of which was their fund raising and how it had also all been put on hold and they were disappointed as they were trying to raise money for a bereavement suite at the hospital.

It was then I had an idea. I contacted Paul again and he transferred me to the fund-raising manager where my idea was aired, and she thought it was a good idea and gave me advice accordingly.

I decided to stage a photographic competition to post on a few different Facebook pages, both photographic and general discussion forums. It was for people to submit three of their favourite feel good photographs that involved nature, animals and landscapes etc. I would then select five of the most suitable photographs based on colour, composition and subject and from those the winner would be selected via a random number generator phone ap.
Based on the winning photo I would create a painting, to be auctioned.

Something to cheer people up too in such worrying times. The response was phenomenal. Hundreds of photographs were submitted. For a week I was a very busy bee. 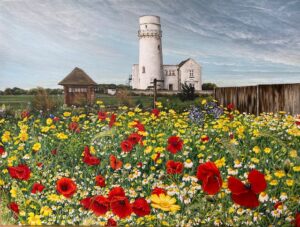 The winning photograph was that of Hunstanton lighthouse, it was selected in the final five for its composition, a mass of wildflowers in the foreground, with beautiful poppies, along with the fact the lighthouse is also quite a feature here in Norfolk.

All the finalists were contacted prior to featuring their photograph, that if needed I was given poetic licence to alter anything I felt necessary, obviously with a view to retaining as much of its originality as possible. The winning photographer, Julie May Smart was more than happy with my idea to enhance the painting to a sunny summer’s evening, creating shadows, but still brightly lit as the original photograph was taken on a very dull day, I also created a sky that had a bit of character to it rather than pancake white.

Throughout the painting of the lighthouse, I sent Julie regular updates. Bless her, she was so chuffed she was having her photograph painted and even more so when I sent her a photograph of the finished item that in the end had taken me just under 300 hours in total to paint. I’d loved every minute.

I will be staying in touch with the fund-raising manager, Laurence, she is keen to auction the painting live on December 3rd (pending confirmation) as they are having a big fund-raising promotion event involving local media.

I have yet to approach three printers in the Kings Lynn area that Laurence has given me details of, in the hope they will be charitable and do a run of 50-100 signed copies, again, all proceeds to go to the bereavement suite. (I’ve already received a few requests).

Finally, this is something that is actually closer to my heart than I first realised. It wasn’t until I had neared completion of the painting that Laurence sent me the full title of the fund along with the printer’s details, which was “The Maternity Bereavement Suite”.I was numb. Everything came flooding back to me as 17 years ago I was pregnant and went full term with a little girl, she passed during labour actually on her due date and at the time there was no support whatsoever and nowhere to go. They say everything happens for a reason, And I just hope this painting raises a healthy sum.

I first began selling paintings at the age of 13 and at the age of 14 I approached the proprietor of my local buy xanax xr online Spar shop and asked if I could advertise my paintings for sale. She was extremely kind and offered me a space behind the till to sell my paintings one at a time.

By the time I was 15 I had a little production line in operation, painting squirrels, badgers, birds, sunsets and more. At this time the proprietors commissioned me to paint their dog and actually hung that in the shop with my details. This then increased the amount of commissions I did involving a great deal of pet portraiture. I also became a well-known visitor on one particular Saturday market stall as I had bought just about every colour of Bermuda shorts and pedal pushers purchased with my newfound wealth (now I’m showing my age).

Once I started my art course at Wisbech college my free time became drastically reduced because as we all know, artwork can absorb hours of your time in the blink of an eye. I continued to work as a Saturday girl which I had also done since the age of thirteen, but my Sundays mostly involved art homework, so commission work became secondary to this.
When I left college, I went to work for a graphic design company in Peterborough and resumed selling painting commissions. Unfortunately, the work was poorly paid and as a result I changed my occupation and went into retail management for a chain store. During that time, I began painting for myself with a view to holding my own exhibition, something I had always dreamt of.

At that time local artists exhibited at Wisbech museum. I always felt it was a dark and hollow room, so I approached the proprietors of The Angles Theatre in Wisbech and asked if I could exhibit in their bar area, Macready’s, as it was light and airy. They obliged and, although I remained anonymous as I didn’t quite have the confidence in myself, it was fabulous mingling with buyers and serving a complementary glass of wine to those who attended.

The exhibition was a success and I sold many of my paintings. I was absolutely thrilled, especially as Ian King dropped in and found me out. He was very complimentary, and I was so flattered. I was six months pregnant when I held the exhibition and the plan was to work full time in the art world again once my baby was born. But unfortunately, life can change and as a single mum I had to get a full-time job, but I still painted at the weekends and sold many commissions.

Living on the bread line for a number of years with a mortgage to pay wasn’t much fun, so after 18 months of pondering what I could do I decided to retrain in a field which I’d always been fascinated in, nutrition! The idea was to have the two businesses running in conjunction with each other but working for myself.

One thing led to another and within a week I was back at college in Kings Lynn studying to be a Holistic Therapist. It was a three-year course condensed into one. I’m not sure where the year went as it was so intense, my poor grey matter felt liquidised at times. But I scraped through without putting the smile on a money lender’s face and also received the ‘Student of the Year’ award for my department. (That would’ve shocked my schoolteachers).

So, moving swiftly forward, things worked well for a while. I’d got myself a room to rent in the local chiropractors and a friend’s private gym, where along with treatments such as massage and reflexology I was able to counsel and help clients with things like dietary and exercise advice, plus natural remedies etc.

But as I became busier with my business Holistic Health, I was having to turn down freelance work and commissions due to having regular clients that I couldn’t just cancel and move each time. After around three years I began to focus solely on the therapy side of the business which has now been established 22 years.

I do lead a very hectic life, plus I will be putting my house on the market
with a view to moving to Kings Lynn, a new chapter in life.
This time I won’t be looking for an extra room in a house in which to practise my therapies, I will be looking for two, something I’ll be putting in place, in the form of a large insulated log cabin in the garden where I can have my art equipment set up permanently and partitioned from my treatment room.

Lockdown made me realise sometimes you have to make small sacrifices in life to satisfy the soul.

Thank you for taking the time to read this article.