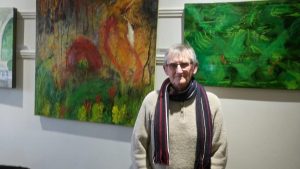 The Sould Café in King’s Lynn was our chosen venue for the first Art Exchange of the year. On a chilly February morning, we had an informal gathering in the gallery section of the Café. Pat Hillard was showing his work so it seemed only natural to ask him to say a few words.

The works on show at the Soul Café were all mixed media or oil, mostly abstract but with a couple of more traditional pieces. Most of his highly experimental work was inspired by either music or poetry. Either a song title or maybe a line from a poem or book provided the inspiration for the predominantly bright and colourful paintings. 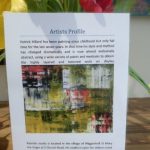 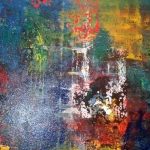 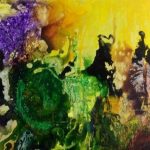 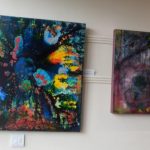 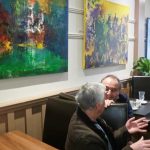 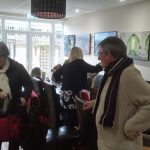 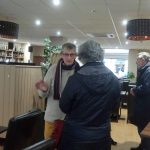 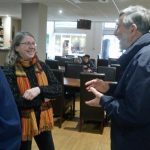 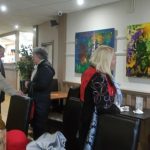 Flavour Bud Living by the late Don Van Vliet, AKA ‘Captain Beefheart’ is music Pat has been listening to since the late sixties. In the painting of the same title, he decided to try and interpret some of this music on canvas. The challenge of interpreting this unconventional ‘music’ may lead to a small series of paintings. Pat already has several titles in mind.

We also heard from David Cook about Chromacolour a paint used for animation cell painting. David showed us a very intricate painting of a Mallard done in Chromacolour. We can look forward to a future Art Exchange where David will give us more insight into this amazing material.

Ann Froshaug told us about the moving ‘War to End all Wars‘ exhibition at Ely Cathedral in which she was one of 17 artists involved in the installation.