(photos by Chris Ward)
It was a beautiful September morning as we made the short drive from our holiday cottage to Chatsworth House in the picturesque Derbyshire Dales. The road wound through the steep wooded hills and sloping fields that divide the valleys of the river Wye and the river Derwent. Arriving early, as we did, without huge numbers of people about, Chatsworth did not disappoint, sitting majestically on the eastern banks of the river Derwent and set in a landscape designed by none other than Capability Brown.  Historic houses like Chatsworth have beautiful interiors, but for me it is the landscaped gardens that I feel drawn to.

We entered the gardens onto a gravel broadwalk running along the western front of the house and a path to our right led us to the Emperor Fountain, which is located in the Canal pond. This fountain was built by the 6th Duke in 1844 when there was a chance the Czar Nicholas would be coming to visit…He wanted this fountain to be bigger than the Czar’s back in Russia! The fountain is gravity fed by water from the hills above the house, and it can reach a height of 200ft. 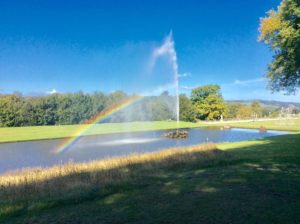 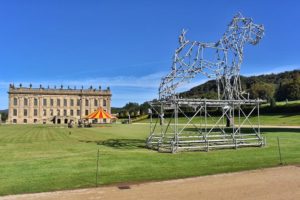 The classic view of the house is from the end of the Canal pond with the Emperor fountain dead centre as the focal point, but to our amusement and surprise we came across a huge structure in the form of a dog, made up entirely from scaffolding poles. This is a sculpture by Ben Long, a contemporary artist known for other works made with scaffolding, such as the Lion, the rearing horse, and the stag.  He was commissioned to create a piece for ‘The Dog: a celebration at Chatsworth’. He wanted his work to convey love, devotion and unconditional loyalty, and a sense of fun

Along one side of the canal pond, towards the end of the broad walk is an avenue of beech trees and from here, looking back we could see the rainbow created by the fountain.
Deviating slightly from this path, and mounting a few steps, we found ourselves in a small woodland clearing, with the Autumn sun filtering through a light canopy of leaves to reveal several bronze heads on wooden stands. These are sculptures by Angela Connor, well known for her busts and statues of well-known people such as Lucien Freud, and Tom Stoppard, among others. Early on in her career she was an assistant to the well-known sculptor, Barbara Hepworth. 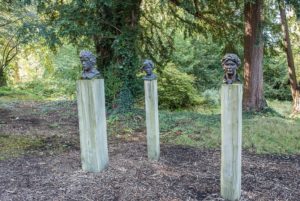 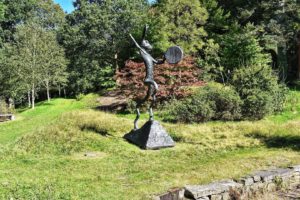 Somehow these disembodied heads seemed to fit in very well with the eerie woodland setting.
Following along another set of winding paths and signs, we arrived at The Grotto, a lovely tranquil pond strewn with waterlilies. Beside the pond stood the tall 20ft high sculpture…The Drummer, a giant hare gleefully beating a drum, the creation of Barry Flanagan, and commissioned to commemorate the present Duke and Duchess phentermine online buy coming to live at Chatsworth in 2006. Sadly, Barry Flanagan died in 2009, but his work is still exhibited by his estate. He came from a family of Music Hall performers, and this background had a profound influence on his work. He is probably best known for creating giant hares with long gangly limbs, and human characteristics, and activities.

Another such piece, the Hare on a crescent and Bell is sited in the Broadgate centre, in the heart of the city of London. I would rather see him on the green and timeless lawns of Chatsworth than surrounded by high rise office blocks and throngs of bustling commuters!
Leaving the Grotto, we retraced our footsteps along some of the paths towards the Kitchen and the Cottage Gardens, and of course these were beautifully laid out with colourful borders and exquisite topiary created from box, privet and yew hedging. Chatsworth grows all its own food, sourced from its greenhouses and kitchen gardens, now located where the carriage horses would have grazed in days gone by.

Making our way down, back in the direction of the house we arrived at the beautiful Cascade fountain that descends via a series of 24 steps from the top, each uniquely cut and of differing texture so that the sound made by the water would vary accordingly. What attention to detail! A baroque temple at the top adds to its grandeur and makes a fabulous focal point. Some years ago, I watched a documentary that followed the badly needed restoration of the waterfall…. ever since then I’ve wanted to visit Chatsworth and see the Cascade in real life, and I can honestly say it surpassed my expectations!

Finally, we followed the Cascade down to the Stables and The Carriage House Cafe for a bite to eat. Just beyond the entrance to the courtyard with its neatly placed chairs and tables stands the poignant and beautiful sculpture of War Horse, by Dame Elizabeth Frink, a sculptor and printmaker, whose work focused on natural forms of animals, men and religious sculptures. If you have seen the heartrending film based on the book ‘ War Horse’ by Michael Morpurgo, you will be moved by the horrors of war that this sculpture symbolises. We didn’t take photos of War Horse because by now it was so busy and hard to get a good viewpoint of a big sculpture, but there are many photos on the Internet, which for copyright reasons I couldn’t use.

It was a wonderful day with so much to see and so little time…..but I know I’m already looking forward to our next trip. Next time you go into London, if you have time, go along to the Broadgate centre, next to Liverpool Street Station, and see how Mr Hare is coping with the bright lights of the City! (Barry Flanagan’s ‘Hare on a Crescent and Bell’).
Chandra Ward