Esther Boehm’s ‘Ether’ is a stunning work. Immediately visible on entering the church of St Margaret of Antioch at Cley, its repeated forms are both separate and work as a composite whole. White, suspended in the air above the baptismal font and above the tombstone of Francis Neale Gent (1711); in front of the magnificent west window, catching every nuance of light on and through the fluctuating sheen texture of each form. This maximises both visibility and the symbolic purity of white. Sometimes it even reflects the stone structure of the cinquefoil and arch of the window behind.

‘Ether’ occupies an area of around 13 square feet. It is hung high from an independent rectangular grid structure of painted bamboo. Each corner of the bamboo structure is reinforced with a triangle to which a small speaker is attached. The sound emitted (made by Esther on a keyboard simulator) is triggered by human presence, occasionally by a strong wind. To my knowledge, this is Esther’s first making of sound in her work. The sound is abstract, minimalist, atonal and gently pervasive. It touches another dimension. And what a successful adventure it is! Amanda Geitner, the curator of Nowhere, commented that Esther was the only artist ‘to take risks’. Once the sound process has started, the sound from one speaker generates a response in each of the other speakers. 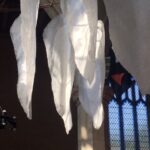 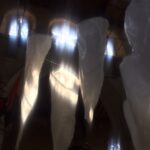 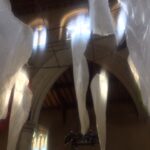 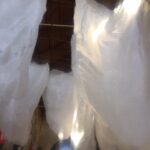 And the form: at the same time open and closed, these are eleven open chrysalises, about to open or envelop their germinated life. Ferns unfolding? Giant plant cradles, each one a calyx to hold the corolla of the flower to come, protecting their calyx-embryos. They hang in semi-transparent delicacy, ethereal for sure. Each form of about two metres in length and 1 metre wide has been constructed through the patient layering of white tissue sheets painted with acrylic medium. Each tissue sheet has been reinforced with thin aluminium wire whilst being laid over a ‘ciment fondue’ base. The ethereal has emerged from a solid material. We see ‘Ether’ from below. The movement of its form reacts with human movement, by this means creating an element of intimacy and participation that contrasts to the overall majesty of the work – majestic not grandiose. Wait, and a slight wind causes a movement at the same time as instigating the sound.

‘Ether’ is a work that is equal to the beautiful context of the interior of St Margaret’s church and its position within it was essential and integral to its conception.