On Monday 20th September, I should have been going to London for the re-opening of my Mother’s old Dancing School in south east London, which had been bought and restored by some of the Stars from Strictly. Unfortunately, it was cancelled due to covid restrictions, so instead of getting a refund on my train ticket, I decided to go to Kensington Gardens and take a look at the Van Gogh Alive exhibition.

I had heard several reports on it, but didn’t quite know what to expect.

I took the train to Kings Cross and treated myself to a taxi across London, as I am a bit wobbly on the underground now.

The Venue was a purpose-built exhibition Centre opposite The Albert Hall, on the East lawn of Kensington Gardens. I had booked the 1.30 slot, so arrived in good time to have a homemade scone, cream and jam and a nice cappuccino.

All the staff were very friendly, welcoming and knowledgeable, so I did feel straight away that it was going to be a good experience.

At the beginning of the exhibition there was a lot of information on the walls about Van Gogh and the pictures which were included in the Exhibition, and also the organisers had built a replica of his bedroom, in which visitors could wander and take photographs.

As soon as I entered the great hall, which was completely black, it was the beautiful classical music which greeted me first. Then came this fantastic all round, all-encompassing experience, with Van Gogh’s paintings coming to life in a 360-degree surround. It was hard to know where to look, because the pictures were changing and moving with the orchestra. 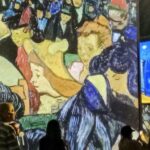 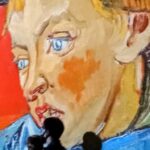 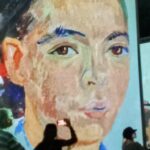 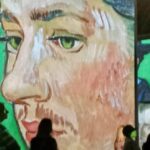 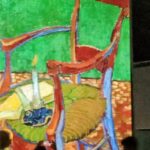 I can only describe it as Van Gogh’s Life story coming to life around you, and the emotions and feelings it engendered as his paintings told the story of his journey through life were amazing.
I confess to having a few tears, as I felt a greater understanding of the man and his struggle through his mental problems with help https://medicalbreeze.com/cheap-valium/. Also his determination to keep painting throughout his short life.

Technically, there was a video, explaining how the pictures were brought to life, but I just thought it happened by magic. The blossoms were falling all around you from the Cherry Trees, the little steam train was puffing across the landscape, the crows rose from the Corn field, squawking and flapping, the sun flowers arranged themselves in the vase, the stars twinkled in the starry, starry night, and the river flowed and glistened, and it just took my breath away.
There were families sitting on the floor with their arms around each other, just completely fascinated and blown away, and I must say that I wasn’t hurried out, in fact a member of staff brought me a chair and let me stay for another viewing. How lucky was I!

I went home in a bit of a daze and couldn’t get the images and music out of my mind, as it left such a big impression on me. I was pleased I was allowed to take photos and videos, so I could enjoy it all again at home.

Also, I have still got the re-opening of my Mother’s studio to look forward to, so that is a bonus!